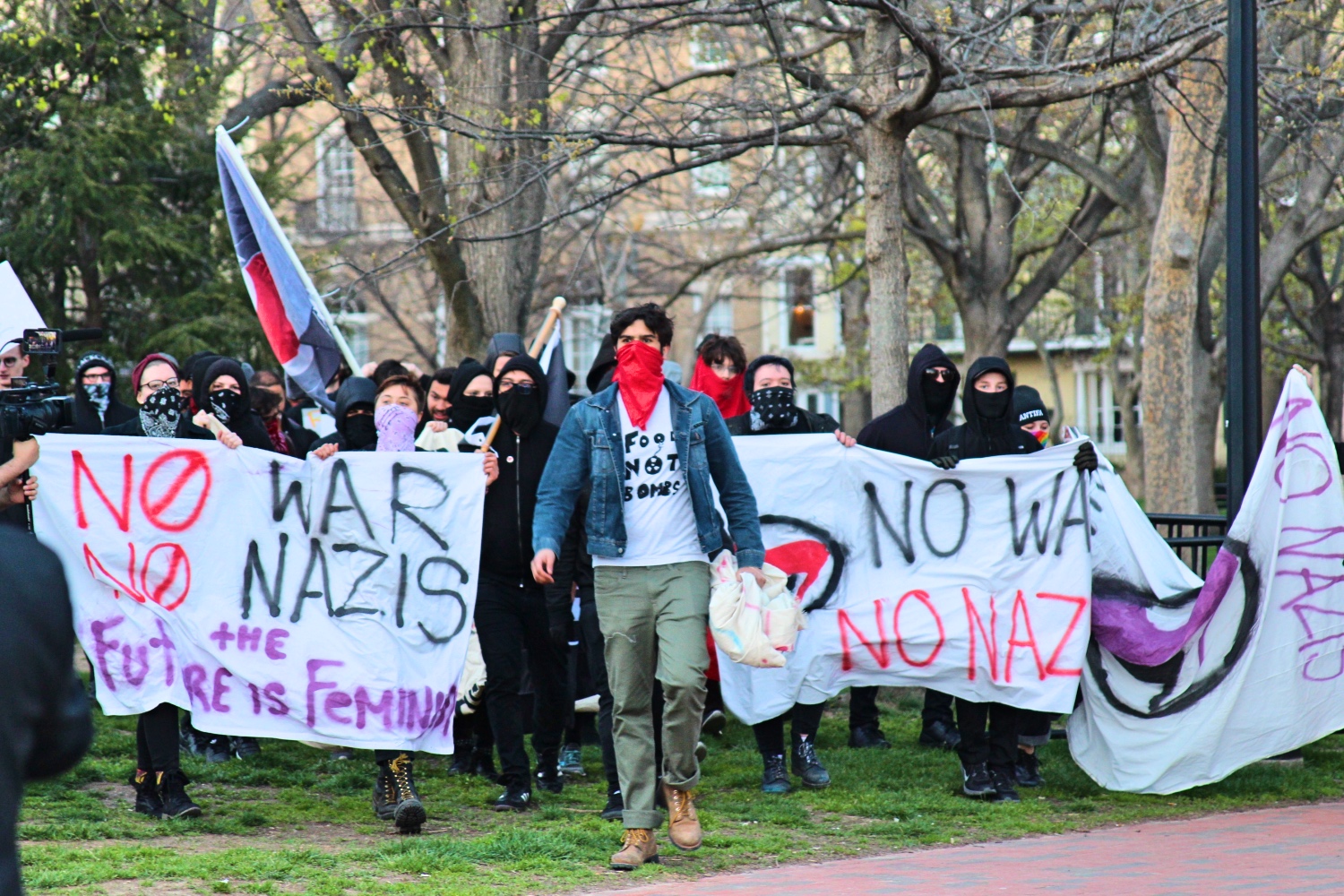 Antifa Bullies Richard Spencer into Darkness as Trump’s Base Fractures 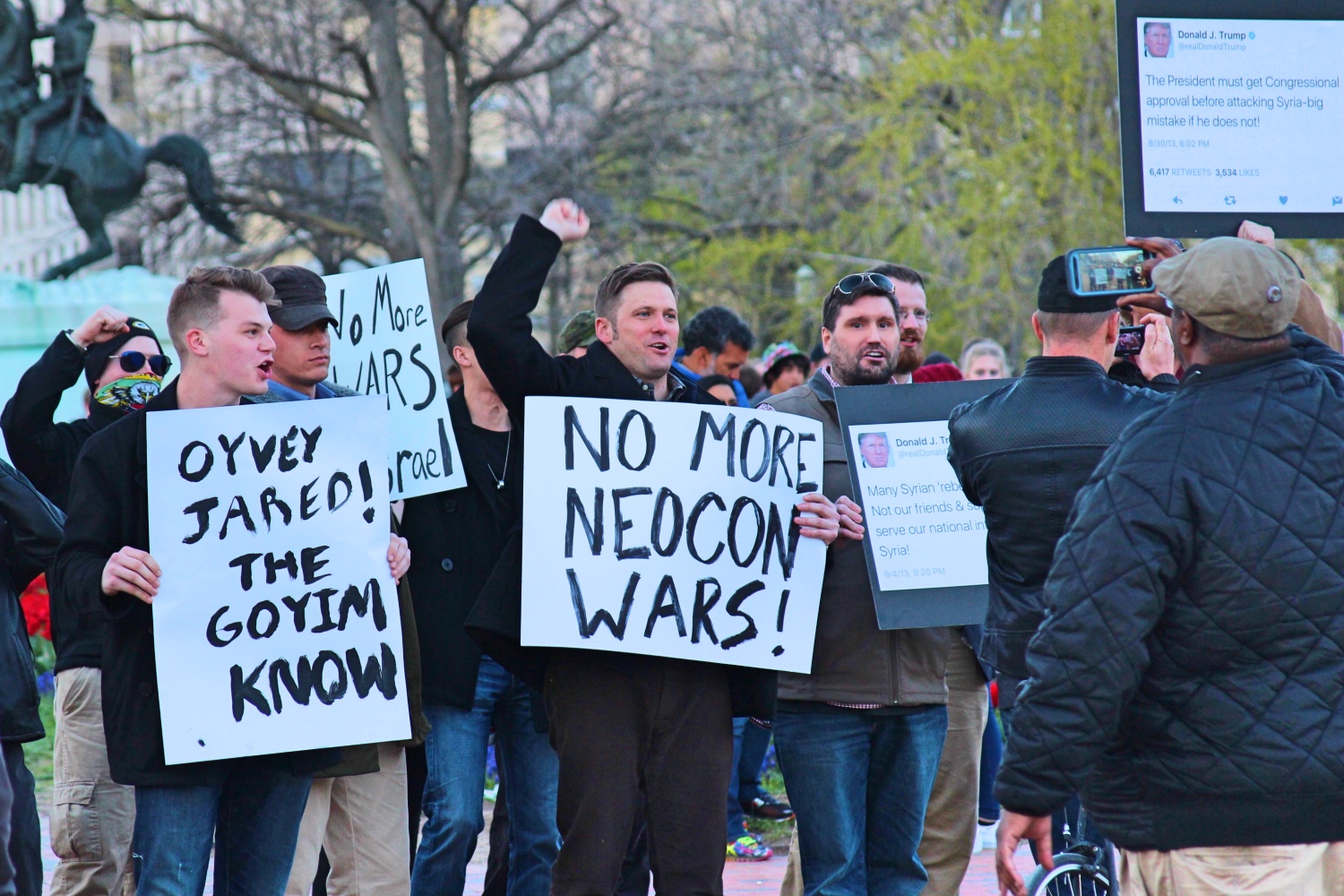 Richard Spencer, a leader within the white nationalist, Alt-Right, and his team sent a clear message to Donald Trump tonight during a protest outside the White House – “No war in Syria.”

Together with a team of 20-30 supporters, Spencer spoke through a bullhorn telling the crowd President Trump had abandoned his campaign promises and now does bidding of the left.

Spencer said, “We come here with a message to the world. Donald Trump, there are people who opposed you every step of the way and yet you are doing their bidding. You are about to engage in their insane stupid wars.”

While the anti-war message was clear, there was another bit of advice offered by Spencer and team: “Fire Jared Kushner.”

Spencer seems to believe Kushner and Ivanka Trump are behind President Trump’s recent military strike in Syria. Or perhaps the known anti-Semite disapproves of a Jew influencing Trump.  Either way, the message was simple, no wars and get rid of Kushner.

In short time, the counter-protestors, or “Antifa” showed up to shout down Team Alt-Right.

And of course, “Fuck white supremacy.”

Antifa came to Lafayette Square ostensibly to push back against Richard Spencer but instead made fools of themselves as they protested an anti-war message. For those who claim to be against fascism, it was an odd display of unintended irony as pierced, dirty (really, you could actually smell them), leftists attempted to shout down an anti-war message of peace.

With their faces covered to prevent identification or to appear more intimidating, the group of 30 or so confronted team Alt-Right as the police monitored without much incident.

While there were minor scrums at the protest, it wasn’t until after the police moved us all out of the square did things get violent. 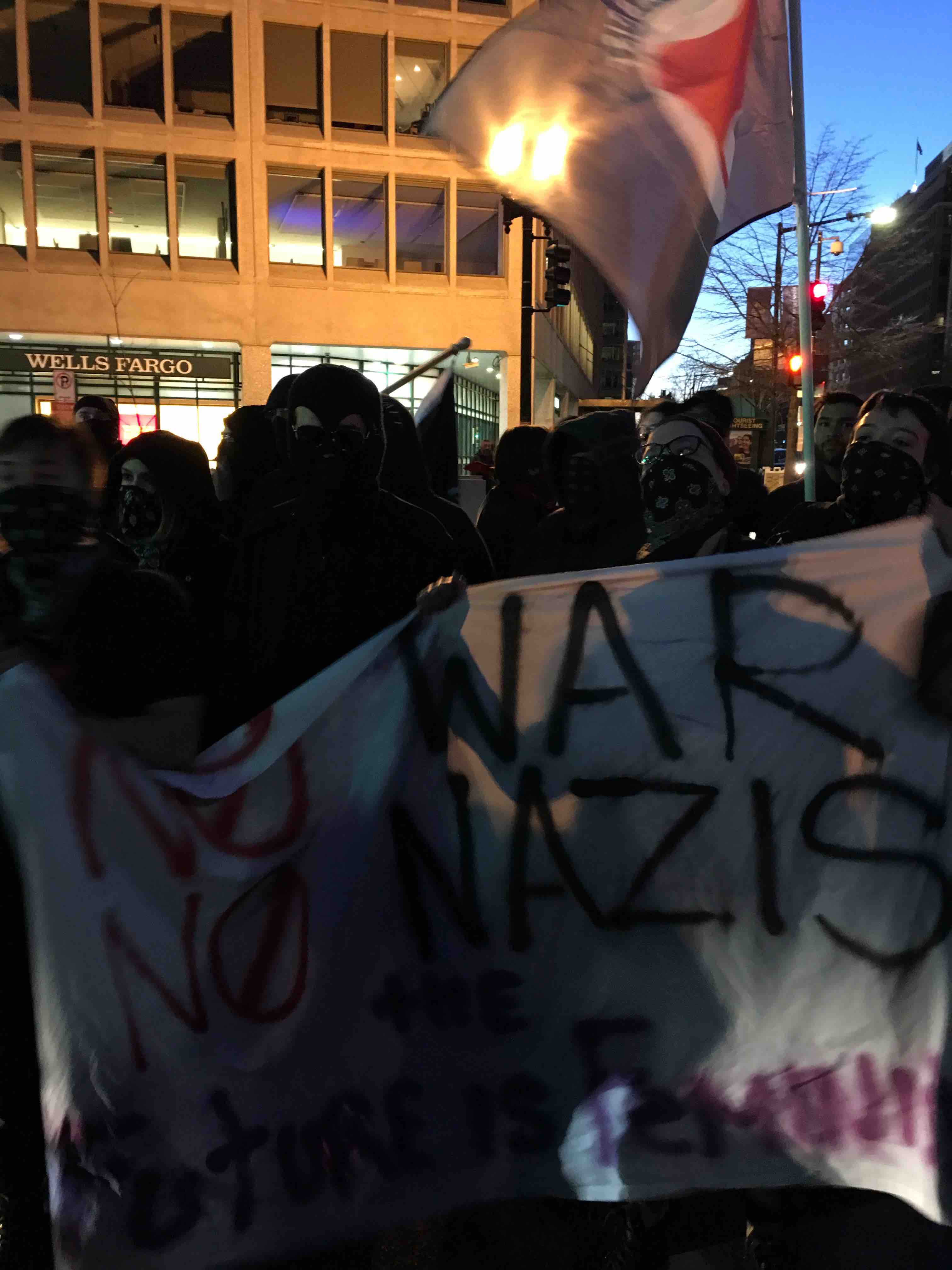 As Spencer and crew tried to regroup and depart via taxi, Antifa reappeared and escalated.

Punches were thrown right in front of me. The police apprehended at least two people as the chaos started to pick up.

Things peaked as Spencer was trapped in his taxi with Antifa banging on the windows, opening the doors and trying to pull Spencer out of the car.  He got out, and this is where it got funny – started running away. 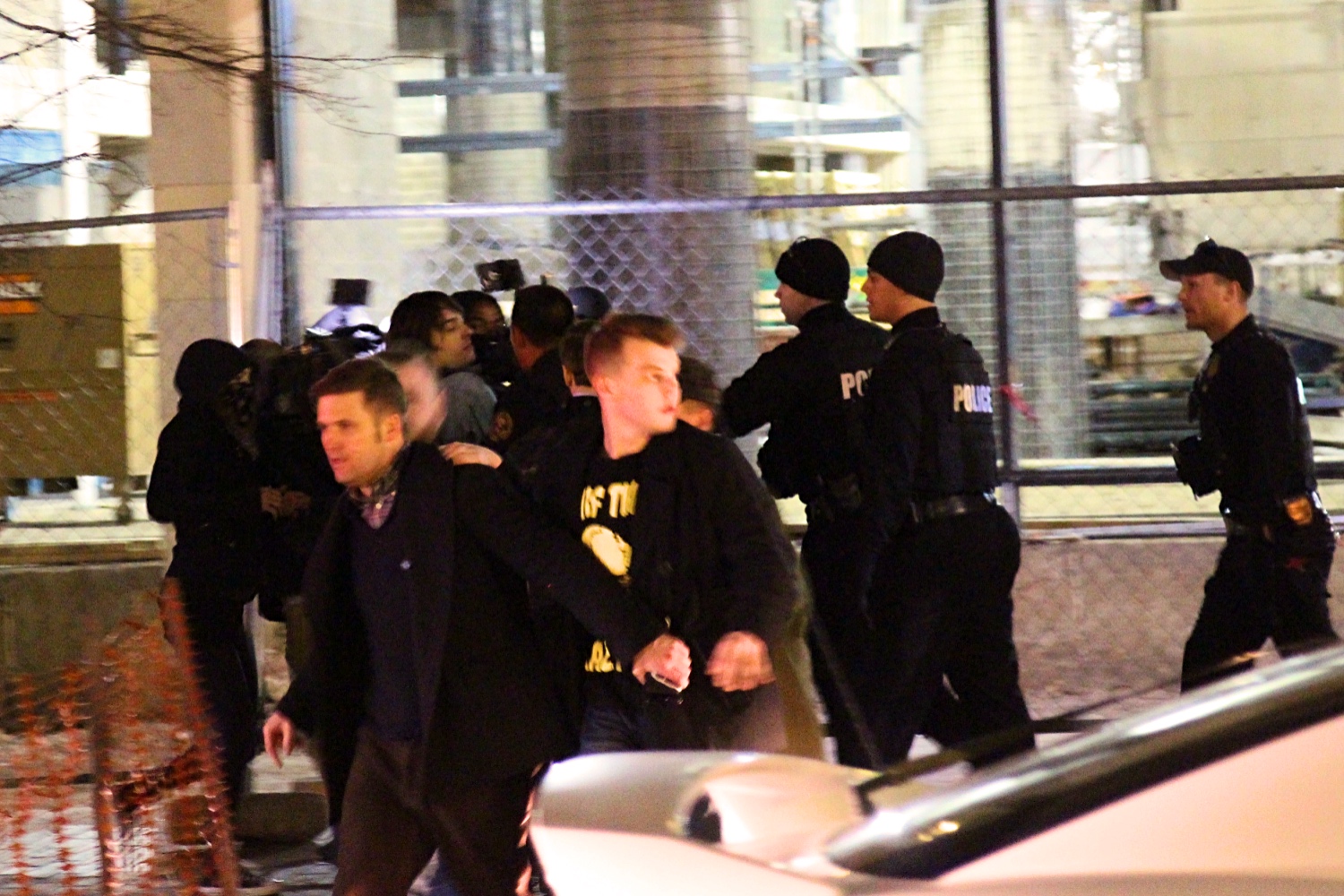 Not to let a good story get away from me, I reluctantly jogged after Spencer and team to catch up with him for an exclusive interview (8:45 in the periscope video):

“We survived.  We had our car surrounded, they were banging on our windows, that’s how crazy they are.”

“These people are willing to use violence.”

“I legitimately feared for my safety.”

“We absolutely achieved our goals in terms of getting out message out. The fracas amplifies our message: No war in Syria, period.”

I then trailed Team Alt-Right to see if anything else happened and while no more violence took place, humor did break out as Spencer couldn’t get a taxi.

He wrapped up the night going from one car to the next, yelling at immigrant taxi drivers to “open their fucking doors,” and watched as they pulled away leaving him stranded. 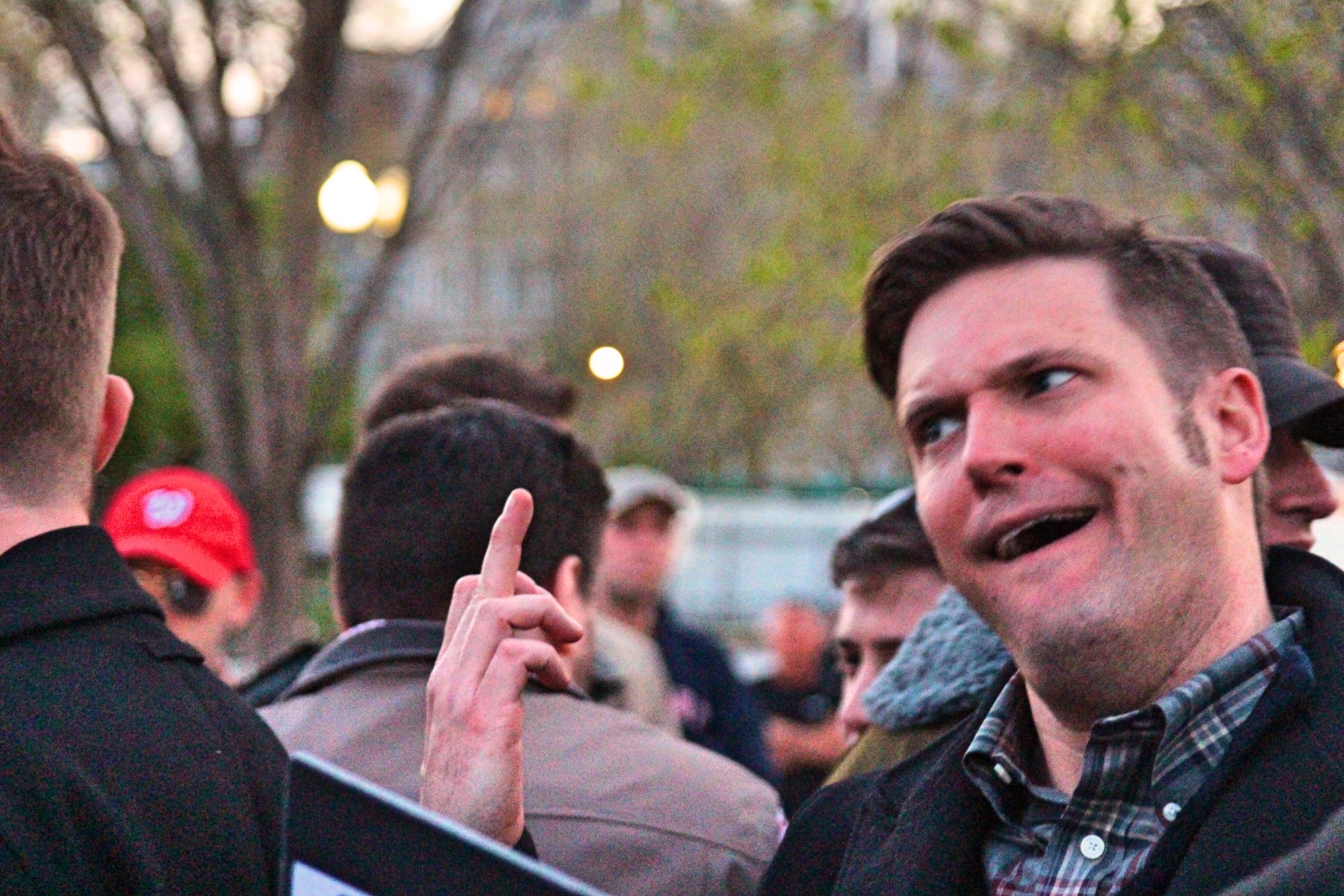 Though the evening started off strong for Spencer, blaring his anti-war message out to Trump and the administration, it certainly tumbled towards calamity from there.

It wasn’t so much the violence that was bad for Spencer, but the lack of strength in the face of aggression.

Antifa people pushed and bullied the alt-right supporters, they chased them away and revealed a naiveté on the part of Richard Spencer that is now becoming a pattern.

Where was the getaway car? Where was the organized departure transportation? If not a black suburban with tinted windows, how about a borrowed Honda Accord from a friend?

After being alone and assaulted on the streets of DC once already, why didn’t someone in his inner circle suggest more precautions this time?

Yes, Richard Spencer’s goal today was to send a message directly to Donald Trump: “No war in Syria.”

And while he did get that message out, for Spencer personally, the subtext of his actions may have damaged him more than the protest helped.

When the green haired smelly antifa mob win the kinetic protest, what good is it to win the verbal one? 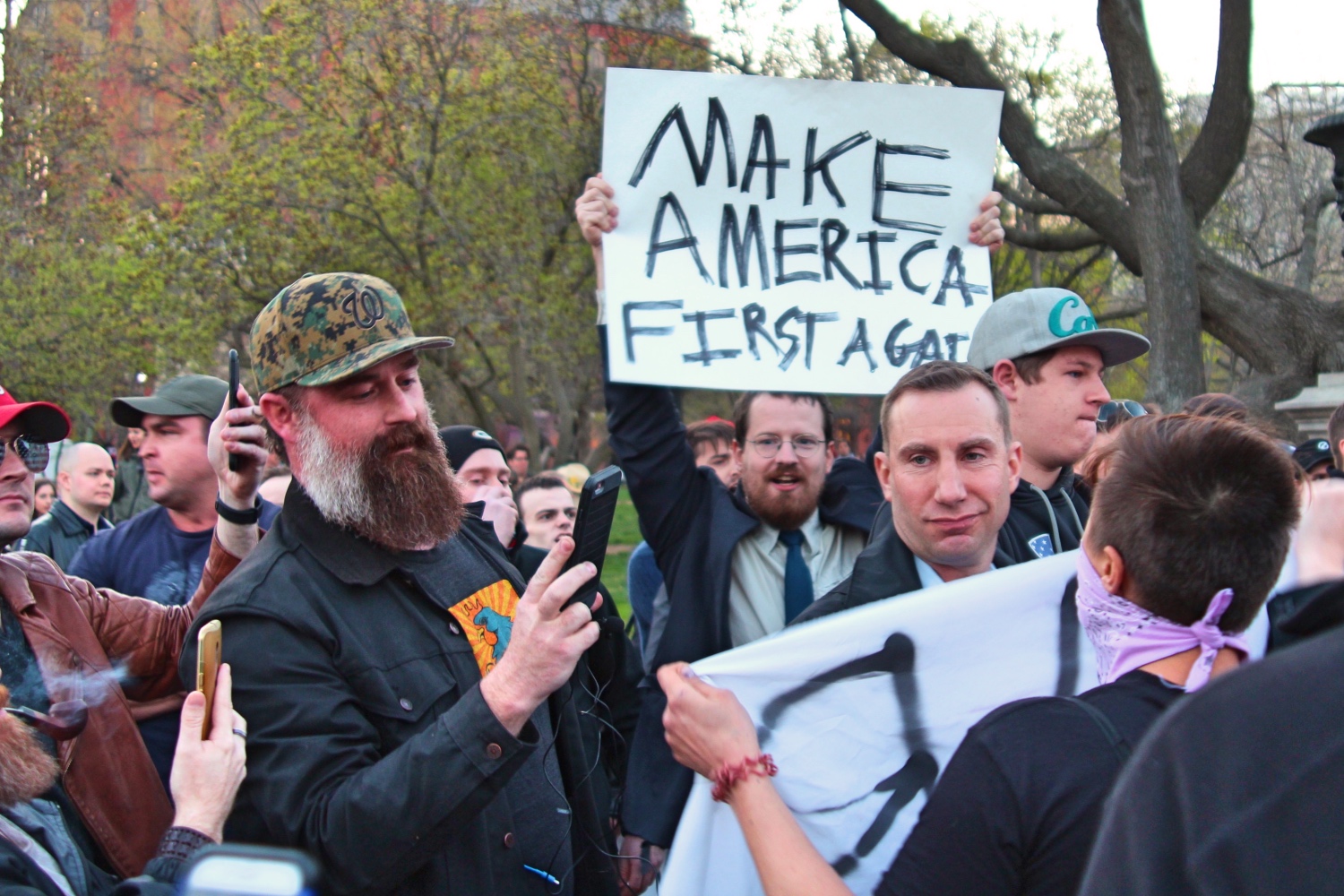 Big Picture: Is Trump’s base fracturing?

It was important for President Trump to hear this anti-war message. But I wonder if he is hearing the louder more urgent call, the growing dissension among his most hardcore supporters.

Will he have the power to achieve the rest of his agenda without the support of those who fought for his election?

To win the temporary adulation of the left for his recent military moves, but lose the core of his support may prove to be more damaging to him than the 59 missiles were to the Syrian airbase.

Check back here for more updates and future reporting on the growing cracks in Trump’s base, along with whatever mess Spencer and team find themselves in next.

Watch me break down the night’s events and discuss Trump’s issues within his base with White House correspondent, Lucian Wintrich:

Watch me and @lucianwintrich break down the night’s events and fractures in Trump’s base over Syrian War. https://t.co/j5hC26L6Bm

Next post: Citizens fight back against Antifa after mob rampages through working class neighborhood