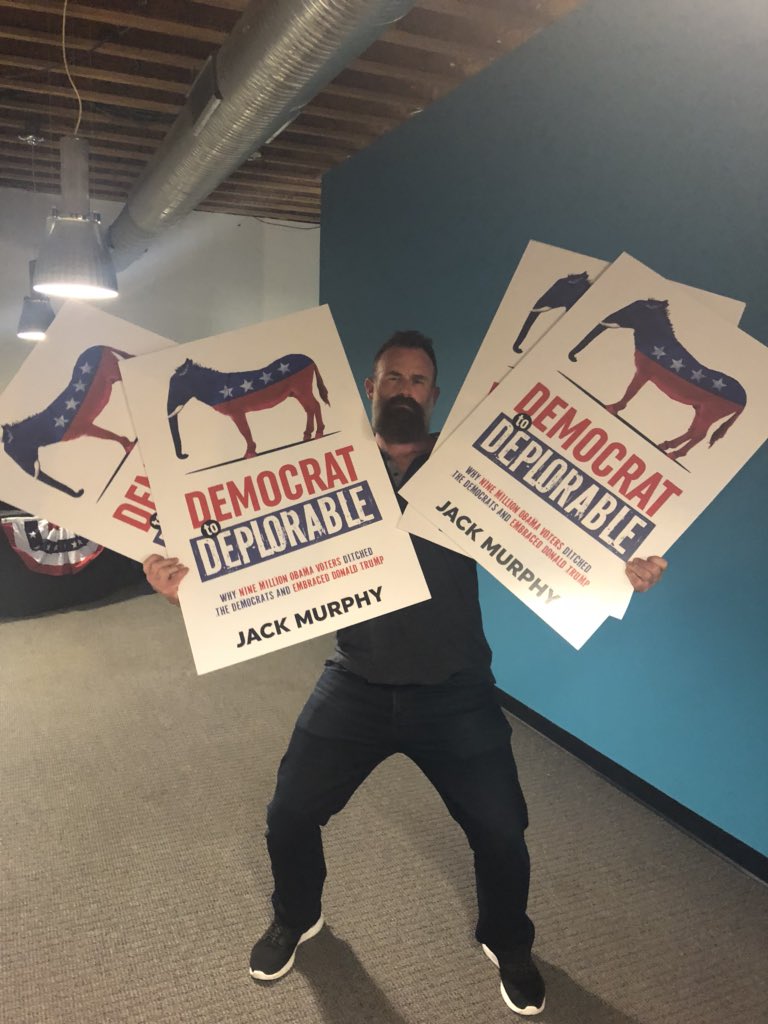 I was behind schedule. The DC heat and humidity combined with the stress of being the guy who was about to be late for his own party had me sweating like crazy. I was at the Kinko’s on 14th St. soaking through my party shirt. The posters were supposed to be ready at 3 pm, yet at 7:15 pm I was still waiting for them.

“Well, we had some technical problems with the printing.”

“Aren’t you guys the professionals?”

The posters were a blown-up version of my book cover, and right there in big bold letters were the words “EMBRACED DONALD TRUMP.”

I was in Washington, DC. The bluest Democrat stronghold in the country. Was I facing sabotage?

Am I being paranoid? Could they really be shafting me just because it was Trump-related?

Eventually, they completed the job and gave me the entire thing for free. I guess this time I was a little paranoid, but based on my recent experiences, I’ve got reasons to be suspicious.

Just a few months ago, ANTIFA and the Cult Left decided to dox me. They called me a racist and a Nazi. The usual slurs.

In turn, I got fired from my job. I even got banned from coaching little league.

Then when I announced the first location for my book launch, ANTIFA and the Cult Left pressured the venue into canceling.

It’s not paranoia when they’re really coming after me day after day, attacking not only me but my family.

It can be hard to find venues which tolerate our punk rock politics in Washington, DC.

So instead of paying a bar to host us, I used my own building instead.

Before I started writing, I developed real estate in the 2000’s and happen to own a great building in a great location. Just like when Trump announced his candidacy at Trump Tower, in a building he created out of thin air, I too would launch something important in a building that didn’t exist until I willed it into existence. I didn’t have an escalator to ride down, but the parallels were close enough. Why use someone else’s real estate when you’ve got a prime address yourself?

A crowd formed at 8 pm outside the space, and we were hustling to get things ready. My trip to Kinko’s hell had pushed back the start time. Plus, I was still sweating like mad. I took my shirt off to cool down and hid in the back conference room. I calmed down and the party was ready to go. We opened the doors and people flowed in.

One theme of the Democrat to Deplorable experience is a loss of community and the creation of another. We Obama / Trump voters lost relationships with friends and family on our way through the political wilderness. Being isolated and alone is hard. Being shunned and shamed is worse. Being threatened and abused can be terrifying. Finding new community became imperative. Luckily, we’ve been working on that for a while now.

Tonight was another chance to strengthen the community which had been building since 2016. Then in January 2017, the Deploraball really marked our arrival. The energy has been growing and I was excited to enhance existing connections and hopeful we could all make some new ones.

We had posters and bunting and signature drinks. We mingled and shared and made new friends. We even took time for me to sign every copy of the book in the house. That part blew me away really. I’ll admit, it felt great. A chance to shake hands and connect with everyone who attended via a brief but personal moment filled me with energy. Smiles surrounded me. 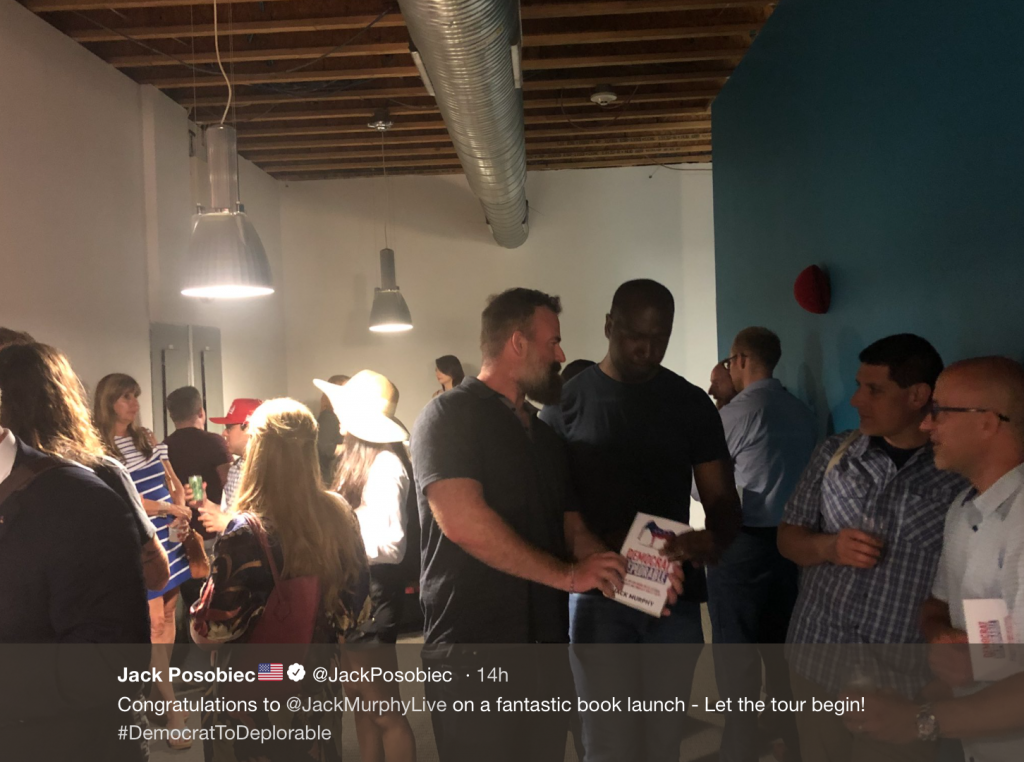 Sooo @jackmurphylive’s book party is awesome and these drinks creep up on you so hard holy shit haha pic.twitter.com/h875kxE2v1

And then it was time to talk. Public speaking has never come easy for me. I get nervous. I worry that the audience doesn’t want to hear what I have to say. I sweat. A lot. But that night I felt more at ease than ever. I knew that everyone there wanted to hear what I had to say, and I knew exactly what I wanted to share. I opened with a sincere thank you to everyone for coming. Gratitude was the theme of the night.

After my remarks, we did a Q and A. One of the first questions was, “when are you going to run for President?”

As the event wound down I looked around with nothing but love, gratitude, and wondrous amazement that the book, the community, and the message have all coalesced into something special. People asked me, “when does the national tour start?” The success of this event plus the amazing book launch has got people talking. Maybe it is time to take this show on the road?

A smart move for the RNC or a PAC would be to send @jackmurphylive on a book tour around the country holding meetups for #DemocratToDeplorable folks. cc @GreatAmericaPAC @GOPChairwoman (photo ht @MarkFanPatriot) pic.twitter.com/dgg1cAWd6u

The launch for Democrat to Deplorable has already been a massive success. My book is consistently ranked in the top 0.5% (yes half of one percentage point) of all books on Amazon. I’m on pace to sell thousands of copies and the demand is only increasing. I predict my book will gain even more momentum as the mid-terms heat up, and when election 2020 comes around? This book will be one of the most important pieces of writing around. Some people already see it that way:

This is the most important book in America today

He was a liberal! Yes, @jackmurphylive was a two-time Obama voter who went for Trump.

Why did he and 9 million others go MAGA?

Find out in the most important political book of the year. https://t.co/jJeoFN7rZ6

One review on Amazon said that the reader underestimated what Democrat to Deplorable would be. She thought it was just a collection of stories about voters in America. But its much more than that. I delve into economics, foreign policy, history, information warfare, and dig all the way down to first principles and fundamental philosophies driving the culture war today. The book is part memoir, part journalism, part research, and part analysis. And on top of that, it’s damn well written too. You will be surprised at how good this book is.

Someone called me a “prose stylist” at the party.

Buy the book and see for yourself.

The future is bright. Momentum is building. Bad things happen and I convert them to fuel for my message. And people want that message to spread all over the country.

There are nine million Democrat to Deplorable voters. In an election that was decided by 77,000 votes over three states, we may very well be the most important and most powerful voting block in the nation. Our numbers are growing and our ideas are spreading. June 25th, 2018 will go down as the night that the Democrat to Deplorable phenomenon found its voice began its march to prominence.

Get on board now. Join us. Be a part of something special. Find new friends, new connections, and new ways to build a community that reaches not only your local area but from coast to coast and everywhere in between.

Thank you again for all the support. Without you all, I’d have nothing more than a diary and I’d be yelling into the ether. But because of you, Democrat to Deplorable is a smash hit and the next few years are going to be mind-blowing. Stick around, buckle up, and enjoy the ride! I know I am! 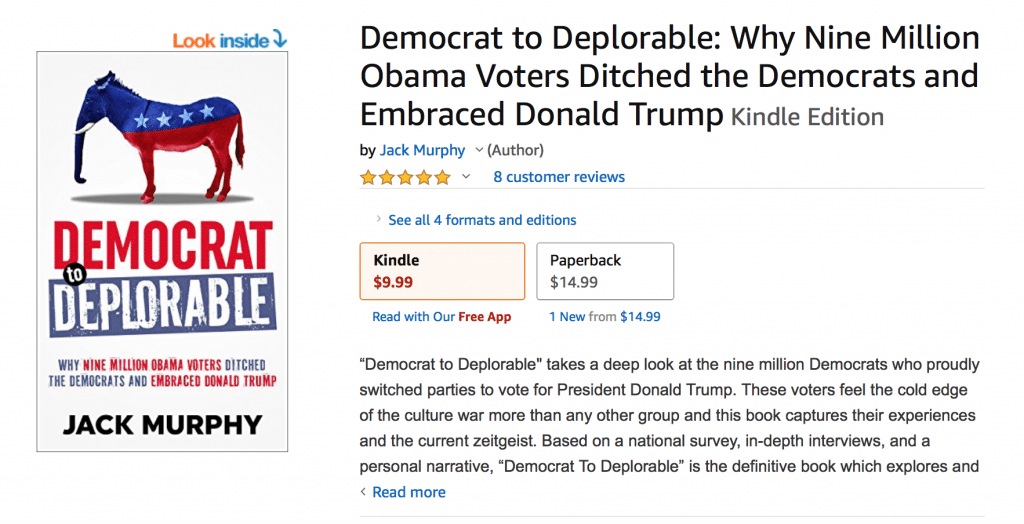 Next post: Jack Murphy Swatted: The Night the Cops Came