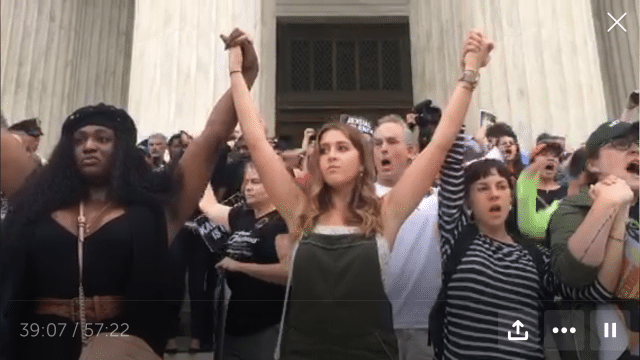 I try to escape my bubble as much as I can. My old facebook page is 99% my old life. So I go back there every once in a while just to see what the nutjobs are up to. But this last time was a stark reminder to never go back.

A short story of the times: 👇

I have this old “friend.” We met in the ’90s when we were ravers. Back then, we broke into warehouses, danced and took drugs. We rebelled against the “man”.

Now she’s a lawyer and has become the establishment.

She has a law degree from Georgetown University. She was a clerk at the Supreme Court. She left a high paying Big Law job to become a federal public defender because she has the luxury of choosing whatever career she wants.

She owns a home, has a dog, and is single.

The other day while she was checking in through security at a courthouse she doesn’t usually go to, the security guard said to her, “and what is your business at the courthouse?”

And that was that.

It so happens this day was also the day I chose to take a quick peek into my old facebook world. and what do I see from her?

“SEXISM IS ALIVE AND WELL IN AMERICA TODAY”

The rest of the comments were equally as bad. “MEN MUST DO BETTER.”

She was wildly offended that the minimum wage minority worker asked her one single question about why she was at the courthouse.

She took this to mean that misogyny and sexism were still rampant across America and that ALL MEN ARE TRASH and ALL MEN MUST DO BETTER.

Me, being me, I couldn’t keep my mouth shut.

So I asked her, what was the negative impact on her life? I presented several other viable reasons why he might’ve asked her the question other than misogyny, and then I pointed out that he was a minimum wage minority worker and she was the privileged one.

She raged on me.

And at no time could she understand that she lived a life of “privilege.”

She went to Georgetown, was a lawyer, a clerk at the Supreme Court, owned a home and did whatever she wanted whenever she wanted.

Yet, to her, MISOGYNY is alive and well in the US today.

Her other friends piled on, they all called me a woman hater, etc.

When I pointed out that “MEN ARE TRASH” wouldn’t sound so good if you said “BLACKS ARE TRASH” or “JEWS ARE TRASH” they didn’t like that much either.

These are the most privileged people around acting like this.

The world is turned upside down, and it’s not getting any better.

After 26 years of “friendship” – this woman blocked me on FB + has effectively ended our relationship, because of her blind rage.

How did we get here?

How can a woman who runs in the MOST ELITE circles of life still believe she is oppressed?

By a minimum wage worker no less!?

If the absolute most privileged of all women still thinks she is oppressed today, then we have a serious fucking problem.

But these people now run our institutions.

THEY WORK ON THE SUPREME COURT.

This is not a delusion.

[READ: The Kavanaugh Hearings Confirmed It: The War is On]

The most privileged among us think they are oppressed.

The ones with the power and money think they are enslaved.

All because a minimum wage worker asked her one silly question.

The world is on its head and we’re all suffering.

An avatar for feminism and the future:

She’s got be lonely, sad, and confused.

She followed the “plan” and what did it get her?

A simmering rage ready to burst out at slight provocations.

She did everything she was supposed to do, and yet she’s miserable and therefore the world around her is miserable.

More than half of people in their 20’s and 30’s are unmarried.

There’s going to be many more of this type of woman in the future.

Angry, sad, with money and power.

You know how the “woke” say racism = prejudice plus power?

In this case, the woman had all the power (education, money, position) and the “offender” had none.

So by their own definitions, it was impossible for him to be sexist.

Or in other words, woke=wack.

This is why you got Trump.

This is why 9 million people ditched the Democrats and embraced Donald Trump.

This is why the culture war rages.