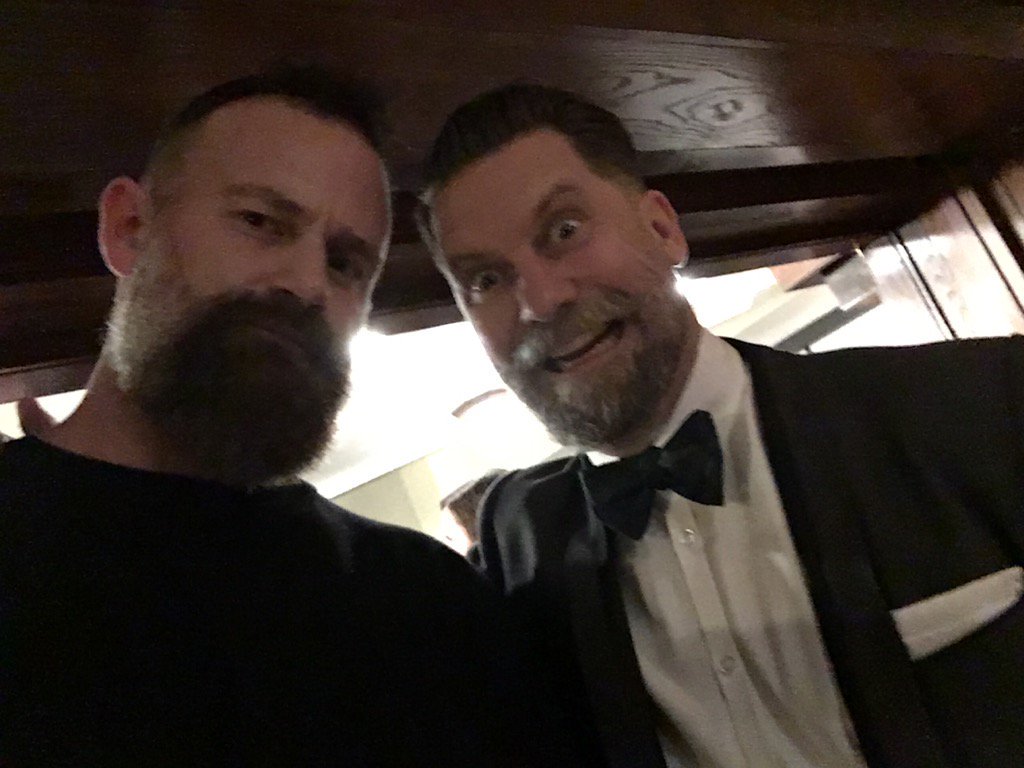 How to Grow Your Audience via Leverage: Stats, Strategies, and Secrets Part V

March 2017 was my best month yet. Twitter impressions are at an all time high and my website has never had more visitors than just this past month. By all accounts, I’m growing and riding the momentum I’ve created over the last quarter. With my pivot complete, my potential audience has expanded from my original crew of like-minded men to just about anyone.

Looking back helps me to move forward. Reviewing what works and what doesn’t, making constant adjustments, and sharing those insights with others is what I’m all about. This month will be no different. Without further delay, let’s get into the numbers: 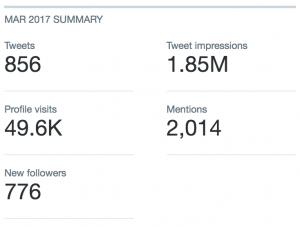 I grew my impressions almost a half a million from last month. Pretty soon I’ll cross two million and never look back. When you think about, it’s crazy I can reach that many people that many times.

Better than the impressions stat is the 49,600 profile visits. Profiles visits are clicks and clicks are real data, while impressions can be sketchy.  There’s no denying people click my profile to check out what I wrote nearly 50,000 times last month.

I added 776 followers, as the rate of growth continues to pick us as well.  Last year I averaged 5 new followers per day.  Now it’s around 25. 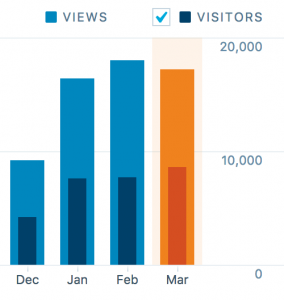 I had 8,500 blog visitors in March, up 12% from the prior month where I had 7,600. Still nowhere near the big boys, but I am moving up the chain. Remember, while the blog officially started in 2015, I paused and even took the site down for six months during 2016. I only recommitted to this back in December 2016 and the stats speak for themselves. The growth is there and consistent and I expect it to continue.

Even with fewer posts (seven), I was still able to draw more visitors. Last month I wrote about free diving, the #RockvilleRape, just how good women have it these days, and even free speech.

I feel like my writing has taken a leap forward. I am particularly proud of this post here, you should read it now, it’s good. Trust me:

[READ NOW: 3 Ways I Was Betrayed, and How I Learned to Trust Again.] 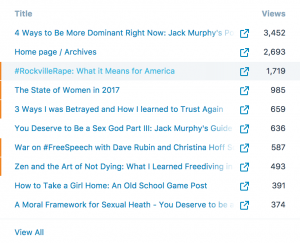 How Did I Grow My Twitter and Blog Traffic?

Here is how to grow your audience:

I’m writing a book called Democrat to Deplorable. I’ve written about it, tweeted about it, and even created a survey for my readers to participate in. I have a clear message, a clear goal, and I’m public with the process.

This creates a path forward, one that is obvious to the readers and allows them to be critical components of my efforts.

People are invested in my efforts and they like to read what I’m doing.

What is your personal mission? Are you providing an opportunity for readers to galvanize behind you?

Put Your Face Out There

I made the decision to go all in and create a personal brand online. I am no longer worried about employers, colleagues, my ex-wife or her attorney finding my writing. Now, I hope they do.

Putting my face on my writing, networking in real life, and being as open and honest as I can be has contributed to my explosive growth. And I’ve gotten to meet a lot of great people along the way.

Networking in real life is one of the best ways to expand your Twitter reach.  Which brings me to my final and most important points, leverage.

Leverage Your Network to Grow

You must be relevant to your allies.

What does this mean?

As you may know, Mike Cernovich is a good friend of mine. But he doesn’t just retweet everything I put out there. No, I follow his lead and get on his theme. So when I tweet something that supports what he is trying to do at the time, he RT’s in turn.

When Dave Rubin gives a talk about free speech, I go to his event and write an article about it.  Then he retweets it.

Alexander Juan Antonio Cortes, Ed Latimore and Ivan Throne – we all support each other and RT each other’s work. We help signal boost each other because it is good for the readers and it is good for all of us. There is plenty enough to go around, we can share and promote without fear of losing out. Abundance mindset is a winner’s mindset.

Free speech is a hot topic. I got a lot of interest in that article.

The Rockville Rape story was a hot one also. Traffic and RT’s poured in for that.  This tweet even went viral:

Liberal cucks will endure rape of their children in school just to avoid having to say:

And this story got promoted all over the net:

#RockvilleRape: What it Means for America – Jack Murphy @Cernovich https://t.co/eJaKFteggU

Being on theme will expand your audience beyond your core constituents. For me, I am not interested in simply being niche any longer.  My goal is to be a respected writer, author, and social commentator. Thus, I have to be out there on timely issues. This month, you’ll see more commentary from me on daily events and stories.

Writing consistently has been huge. Today, I’m a better writer and more efficient than I was last month. I am committed to producing more content next month, even as I write my book at the same time. I am hoping to release 10 or more posts in April, some of them to be evergreen posts, some of them to be current events related posts, and others to be an expansion of my personal brand.

The best way for me to get those stories out there will be to continue to leverage my relationships and network by being relevant and useful to those people.  Just asking for help will not cut it.  Even with good friends, it always pays to offer something first and to never ask for anything in return. Make yourself useful and people will reciprocate.

The blog game is a long one. Preserve your reputation at all costs by being helpful, generous, and supportive and people will return the favor.

Like this post for example. I’m doing this to help all the guys who support me and boost my signal, even if they are still on the rise. I hope I can share some insights which will help all of us.

Leverage your relationships, be on theme, and tweet/post daily and traffic will flow.

Watch this spot.  Watch me grow over the next year.  Let’s do this thing together.

Thanks for reading, thanks for the support, and thanks for being a part of my crew.

If you found this helpful and want to be a part of the team sign up here and never miss a thing:

Next post: Your First Real Estate Project – How to Make A Million Bucks Part III

Previous post: War on #FreeSpeech with Dave Rubin and Christina Hoff Sommers: What the Bias Response Teams Don’t Want You to Know