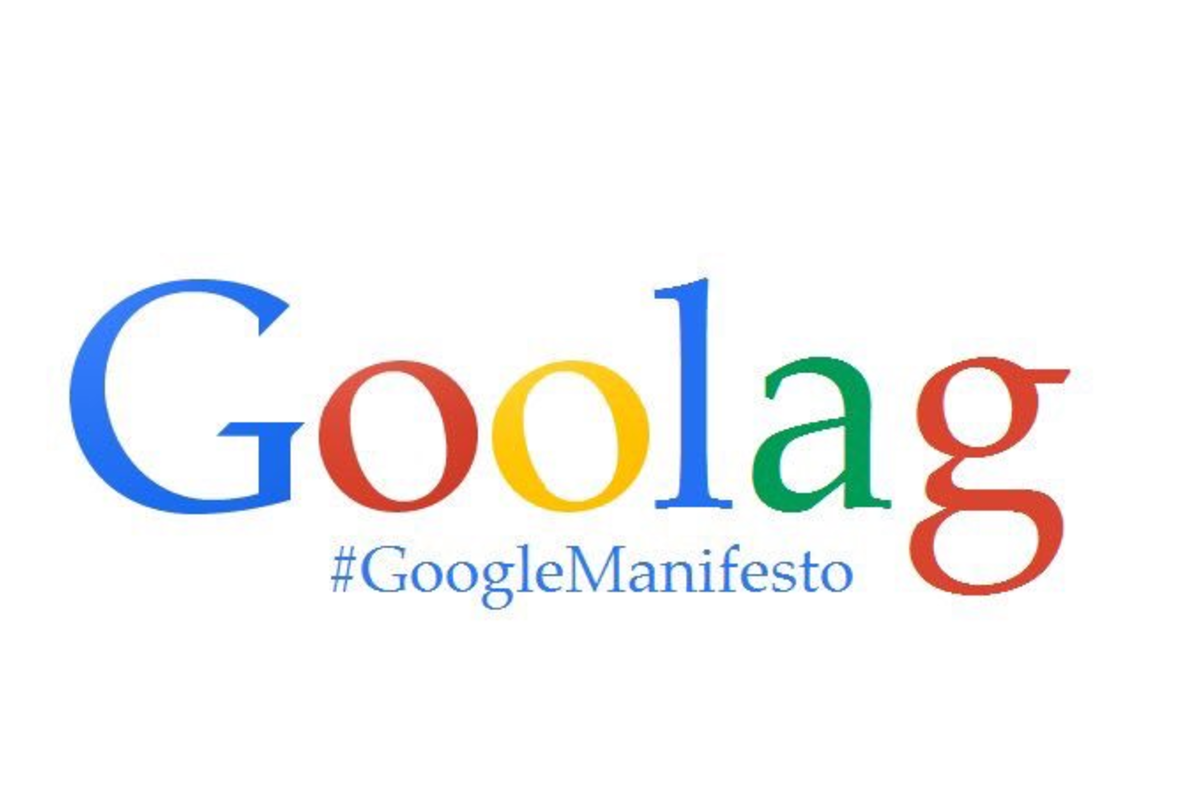 Back in August of 2017, I wrote an article called, “#GoogleMemo is Exactly Why #DemocratToDeplorable is Happening.” It recapped briefly the story of James Damore, the Google engineer who was fired because he wrote a memo that offended his coworkers. Damore had attended numerous diversity workshops and Google asked for his feedback. In return, he submitted a detailed report, with citations, that provided evidence which may explain the perceived gender gaps in the technology industry are actually a result of biology and female agency rather than simple misogyny or patriarchy.

Damore wanted to talk about the science which may explain how people’s individual preferences account for a lack of parity in the workplace. But Google didn’t want to hear it. Google’s leadership seems to believe anything other than a 50/50 split of male/female employees represents an injustice committed upon women by men. That individual choice could account for a discrepancy was unthinkable.

Damore’s memo can be summarized simply, “Men and women are different. They may make different choices because of it.” Google employees found this idea to be so offensive and hostile they were unable to perform their work duties. Rather than take an honest look at the data, Google just fired Damore despite his earnest attempt at dialogue.

It seems for Google, ruining a young man’s life was easier than self-reflection. When faced with assertions which are observably true across culture, history, and geography, but which also challenge the dominant narratives, Google leadership simply wimped out.

Last summer I told you the #GoogleMemo fiasco was a concrete example that the progressive left had willingly abandoned science in favor of ideology. They seemed to wish for a return to the olden days when religion took precedence over scientific exploration. Galileo’s persecution in the 17th century isn’t just a historic relic. It now seems like foreshadowing for a rekindled war between ideology and reason. Equality at all costs vs. science and reason is the battlefield. Truth no longer matters. The only thing that matters is the left’s assault on the “patriarchy” and anything which seems to come from it. Damore and the #GoogleMemo embody this struggle.

James Damore and the National Labor Relations Board

Damore’s #GoogleMemo saga recently took a new twist. After he was fired, Damore filed a complaint with the National Labor Relations Board (NLRB). He subsequently withdrew that complaint in favor of a class-action lawsuit. However, the NLRB continued with their investigation and filed a response despite Damore’s withdrawal. They issued their opinion on Damore’s complaint on January 16th, 2018.

The NLRB found that Google was justified in terminating James Damore because his memo was found to be “harmful, discriminatory, and disruptive,” it was likely to cause “serious dissension,” and that it caused “extreme discord” among Google employees. They concluded that while some of Damore’s speech was indeed protected, the portions of the memo which addressed biological differences between men and women were not. Effectively, the NLRB decided that simply discussing science with your co-workers is now legitimate grounds for termination.

The debates over male/female relations, perceptions of gender identity, and expectations of gender distributions in the workplace have become so intertwined with laws, regulations, and government policies, that they have ceased to merely be gender-related discussions. They are now political speech. And as political speech, these debates should be protected.

Moreover, the science of sex and gender must be defended. The current narratives assert that simply talking about biological differences between men and women is tantamount to hate speech. You can now get fired for pointing out men are different from women. You may think I’m crazy for making such an assertion, but the government’s decision in the Damore case says this explicitly.

In the NLRB decision, they specifically cite the science behind the #GoogleMemo as hate speech. Using three prior NLRB cases, the Board went so far as to compare Damore’s science to accusations of KKK membership, outing a gay co-worker against his will, or even sexual abuse. In each of those three examples, the offenders were rightfully terminated because what they did was based on hate. But what Damore did was present peer-reviewed science as part of a rational argument.

Equating Damore’s memo to lies, abuse, and harassment is a dangerous and troubling development. The NLRB, a national governing body, has now equated uncomfortable scientific truths with hatred. In fact, simply repeating the conclusions of a scientific study at work now constitutes harassment where the consequence is termination. Speaking the truth can now end your career.

We need protections for speech related to gender issues

If the science surrounding gender preferences and biological differences between men and women can be silenced because some people find it offensive, free speech and our ability to understand the world will be reduced. This limited ability to discuss our circumstances and the truth of human behavior moves us away from a deeper understanding of the world and closer to a fearful retreat into denial and obfuscation.

If we become further divorced from reality, future decisions will do more harm than good. We will be governing ourselves blindly. Political decisions must be grounded in unfettered science, not feelings and agitation. Relegating science to harassment is a return to pre-enlightenment times when the Church could punish astronomers for thinking the sun was the center of the solar system.

Science is not abuse. Damore didn’t stand in the Google cafeteria with a bullhorn shouting “women are stupid!” No, he researched the available science on gender and presented a literature review – a standard academic process. If the academic process is now harassment and capable of creating dissent and discord, what are the prospects for meaningful discussion in the future, especially conversations which may run counter to prevailing political trends? Preserving open dialogue is essential to human evolution and our very sense of humanity.

You can hear the truth if you listen to the silence

Google and the NLRB didn’t refute what Damore wrote, they provided no contrary evidence or rebuttals to the science. The absence of a thoughtful reply only highlights what we know to already be true: men and women are indeed different. That the Google staff is incapable of processing such truth is not Damore’s fault. It’s a broader indictment of American culture, which has devolved into one where victims are cherished more so than heroes.

The observation that Google employees are incapable of dealing with facts and ideas which challenge their worldviews is disappointing. It paints a dim view of the future. The NLRB believes workers should be protected from such ideas because exposure to them is harassment and renders people incapable of performing their work. Yes, the NLRB confirmed that statements attributed to biological differences between men and constitute sexual harassment.

American culture is presently split between those who believe in science and reality and those who prioritize feelings over facts. Google, the gatekeeper to humanity’s information and owner of all our personal data, is with the Feels People rather than the Facts People. The sane world shudders at such a notion.

If Google will fire their employees for disagreeing with their policies, what will they do to you when they discover your political ideas? If Google is willing to disregard science as harassment, how will they tweak their search algorithms to ‘protect’ us? Google has become too powerful, too dominant, and too politically motivated to be trusted with organizing the world’s information. Damore’s internal struggle at Google parallels the larger ideological battles raging in today’s discourse.

The #GoogleMemo fiasco and all that has followed is one reason why nine million Obama voters ditched the Democrats and voted for Donald Trump. #DemocratToDeplorable is more than just a vote cast in 2016; it’s representative of a new movement responding to the culture war in America.

As the progressive left moves farther away from reality, as it embraces feelings over facts, and as it abandons liberty in favor of authoritarianism, more Americans will feel the cold edge of the center slice right through them – even as they stand still on the political spectrum.

Ideas which were once solidly Democratic – ideas like freedom, liberty, and science – are now heretical to the progressive left. If you hang on to notions of personal responsibility, individual agency, and the right to make whatever choices you wish – you will inevitably find yourself on the right, even if the left was always your home.

Damore and the #GoogleMemo are a proxy in the larger cold war now emerging. Few examples embody all of the issues like the #GoogleMemo. From gender and politics to free speech and science, Damore’s journey reminds all of us Deplorables that the fight for American values is escalating, there are real consequences to life and liberty for challenging the dominant orthodoxy, and that brave men and women like Damore deserve our support. Our future is counting on it.

If you liked this article, you’d probably love my book. Preorder one today: 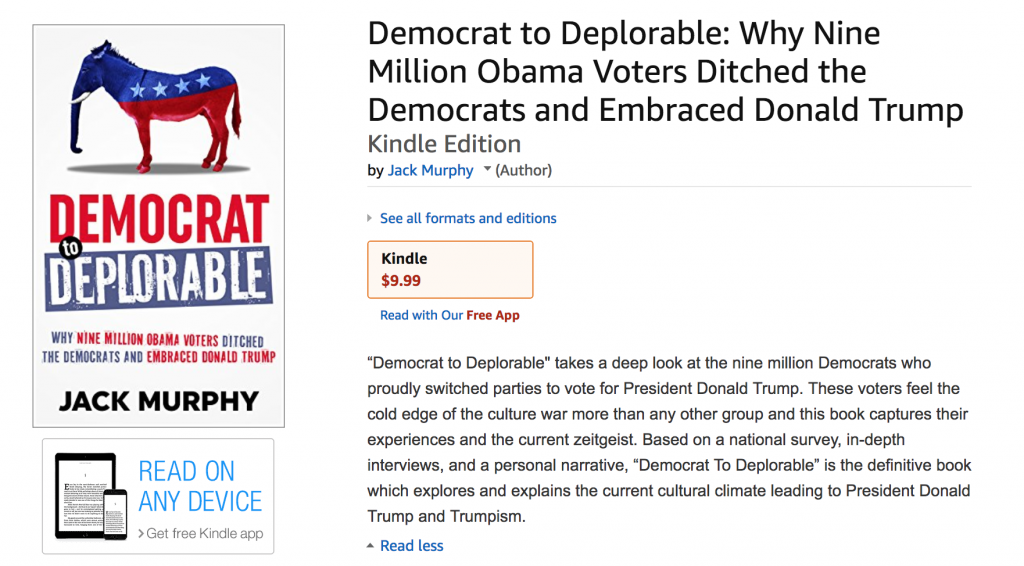