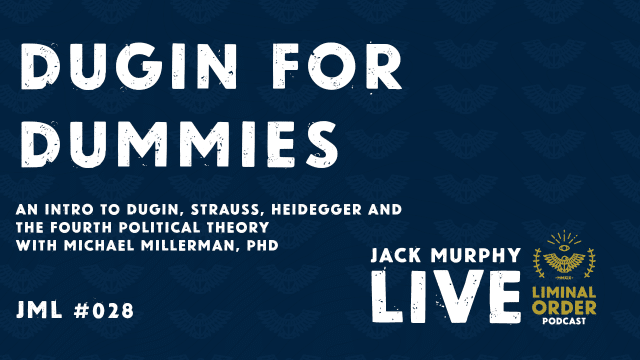 Michael Millerman, PhD is the leading English language expert on Alexander Dugin. Together he and I explore Dugin’s Fourth Political Theory, a controversial, novel, and challenging notion of politics, philosophy, and knowledge.

It is said Dugin has Putin’s ear, so if you want to understand geo-politics today, you must understand Dugin.

We take you through his theories step-by-step. “Dugin for Dummies” is a must listen!

There are three political theories of the 20th century:

Alexander Dugin believes there needs to be space for a Fourth Political Theory.

Dugin begins by rejecting various concepts from each political theory. He rejects from:

He accepts select concepts from each political theory. He accepts from:

Dugin places great importance on the exploration of the most basic human existence that hasn’t been limited by analysis or self-interpretation.

This concept is from Heidegger and it’s called “Dasein.”

4th Political Theory can be seen as having three parts:

Appreciate the blossoming of human complexity.

Next post: How Trump Torched the Tyranny of Title IX (JML Podcast #029 with Robby Soave)