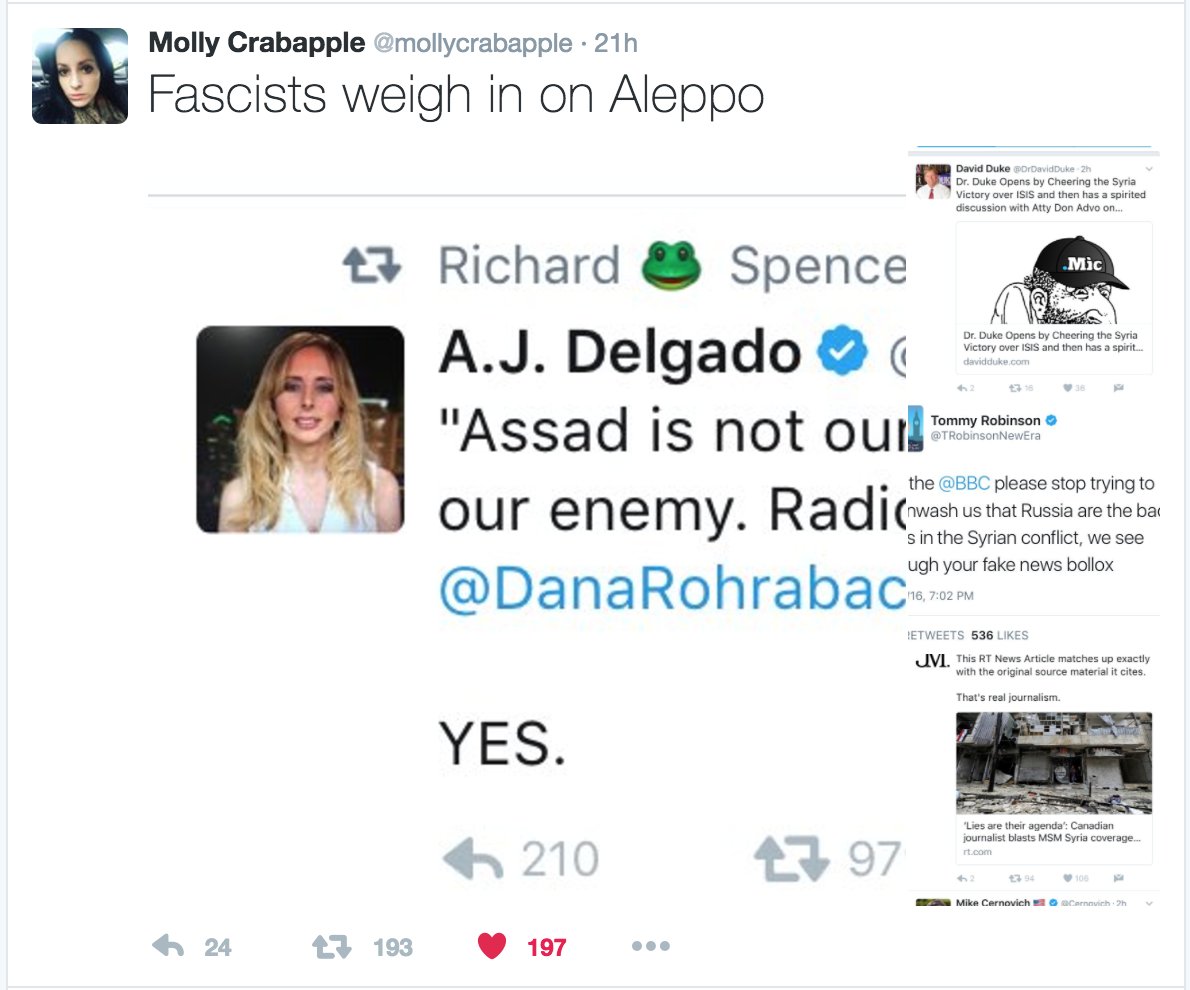 Molly Crabapple of the New York Times Calls Me a Fascist: How Corporate Media Shames and Slanders the Truth

Molly Crabapple, with 90k Twitter followers, who writes for the New York Times, Vanity Fair, and VICE – took time from her day yesterday to call me a fascist.  A fascist of course, being the worst thing you can call someone in a free society.  Why did she do this?  What possible motivation could a famous New York Times writer have for calling me, Jack Murphy, a fascist?

First, lets look at the definition of fascist:

Someone who adheres to fascism or:

“a political philosophy, movement, or regime (as that of the Fascisti) that exalts nation and often race above the individual and that stands for a centralized autocratic government headed by a dictatorial leader, severe economic and social regimentation, and forcible suppression of opposition”

This is the exact opposite of my political views.  I support the individual and individual’s rights above all else, and certainly above those of an autocratic government. I believe in state’s rights and the decentralized power of our Republic, or the ideal at least.  And I believe in a highly capable opposition and expect continuous productive dialogue.

The opposition is especially important.  It is needed to keep checks and balances on those in power. It should bring truth to light.  So when the New York Times reporter calls me a fascist, someone who wants to bring truth and discussion, the opposite is actually true.

This irony is completely lost on Ms. Molly Crabapple.  Using her large following and position of power to slander me as a fascist and discredit the information I was trying to bring to light is the action of a fascist herself.

She believes in corporate statism above all else and variance from the script must be squashed.  If she truly believes in anti-fascism, she would be interested in seeing all angles of a conversation.  She would investigate assertions to determine their validity in pursuit of the truth.

Pursuing truth for it’s own sake is a noble cause, and in Aleppo’s case, the truth could have saved hundreds of thousands of lives, prevented the displacement of millions more, and preserved European order.

Now let’s look at what information I was signal boosting.

My tweet was about Aleppo and the United State’s involvement in the conflict as reported by Eva Bartlett.  I discovered her through my own independent search for facts and truth on the ground in Aleppo.  I felt like I wasn’t getting the whole story from the mainstream press and I so I sought it out on my own.

Bartlett initially came to my attention because I read a Russia Today news article citing her and her unusual position on the Syrian conflict.  Her views seemed outside of the norm and were being posted by the “russian owned” media organ.  In keeping with my skepticism, I checked the validity of the RT article and clicked through to the source material they cited, which was a United Nations press conference where Bartlett and others presented their viewpoints on what is occurring in Aleppo.

Unlike western corporate media’s sources (or lack of), the RT news article matched exactly with the original source material it cited.  I watched the entire hour long press conference to confirm.  Bartlett’s first hand accounts of Syrian support for Assad and his fight to repel foreign terrorists from their country was reported accurately by Russia Today.

Bartlett, an independent journalist from Canada, has self-funded several trips to Aleppo and other parts of Syria. Bartlett speaks fluent Arabic and actually meets with Syrian families in their homes.

She reports that the Syrian people by and large support Assad and his efforts to rid their country of foreign terrorists.  Yes, she calls them foreign terrorists because that is what they are.  They are from other countries, are funded by outside sponsors, and they seek to destroy the legitimate government of Assad, casting Syria into chaos.

I then in turn tweeted the RT article and my assessment of its journalistic quality:

This RT News Article matches up exactly with the original source material it cites.

To which the New York Times writer responded:

Fascists weigh in on Aleppo pic.twitter.com/IWZfWHecNl

Here I am just a guy with a computer who checks sources and views source material.  I only want the truth and have no agenda to push.

And somehow I’m the fascist?

Again, the irony is completely lost on the New York Times writer.

Molly Crabapple is using her position of power to slander an unknown American because I pushed the truth against her agenda.  She is the one putting her corporate statism ahead of the individual and using shame and slander to suppress opposition. Which, happens to be the exact definition of fascism as we saw earlier.

Or, perhaps she did watch the entire press conference and was offended by Bartlett’s assessment of the corporate media’s coverage.  Bartlett stated:

“And, on that note, what you hear in the corporate media, and I will name them – BBC, Guardian, the New York Times etc. – on Aleppo is also the opposite of reality,”

“You ask why we aren’t seeing this,” Bartlett said. “This relates to the other gentleman’s question about why most of the corporate media are telling lies about Syria. It’s because this is the agenda; if they had told the truth about Syria from the beginning, we wouldn’t be here now. We wouldn’t have seen so many people killed.”

Yes, she calls them all out as liars complicit in a mass disinformation campaign which has resulted in catastrophic death and destruction.

Perhaps the New York Times or other western humanitarian organizations would go to Aleppo and check on all of this themselves?

Well, according to Bartlett, there are no western news or aid organizations on the ground in Aleppo and all the information the western media reports is based on information from a one man website in England called the Syrian Observatory for Human Rights.

If Bartlett is right, then the entire corporate media apparatus is complicit in the on-going deaths of hundreds of thousands and the displacement of 6-8 million people.  This refugee crisis has changed politics and culture across Europe, leading in part to Brexit and the rise of populist-right leaders in a number of countries.

The spillover effects of the Syrian migrant / refugee crisis can not be overstated.

So, perhaps Ms. Molly Crabapple did in fact view and understand the power of Eva Bartlett’s message.  Maybe Crabapple does feel the cognitive dissonance and shame caused by supporting lies which create death and destruction.

We saw Crabapple lash out immaturely, slandering me rather than process truth into her lie addled brain.

This is the real fake news.  And we must keep up the fight against this fake journalism because disinformation is being used to shape the world, murder countless thousands, and displace millions more.  It creates hellish environments of death.

As Jordan Peterson has said:

The ability to speak your truth is the bulwark against hell. From Joe Rogan’s interview with me: https://t.co/T6sJfL9d3r

(Watch that podcast if you haven’t already, I can’t recommend it enough)

So when the Ms. Molly Crabapples of the world yell fascist, it means we are getting closer to the truth and we must not stop.

Molly, If what I did was fascist, I accept your label.  Yet, I continue to hope you can find enough human compassion to seek the truth rather than crassly contribute to death from the warmth of your New York apartment.

Until then, Ms. Molly Crabapple, until then.

Next post: The Calculus of Divorce (and how to convert pain to progress)

Previous post: No Job for the Visionary: Finding the job that doesn’t exist.