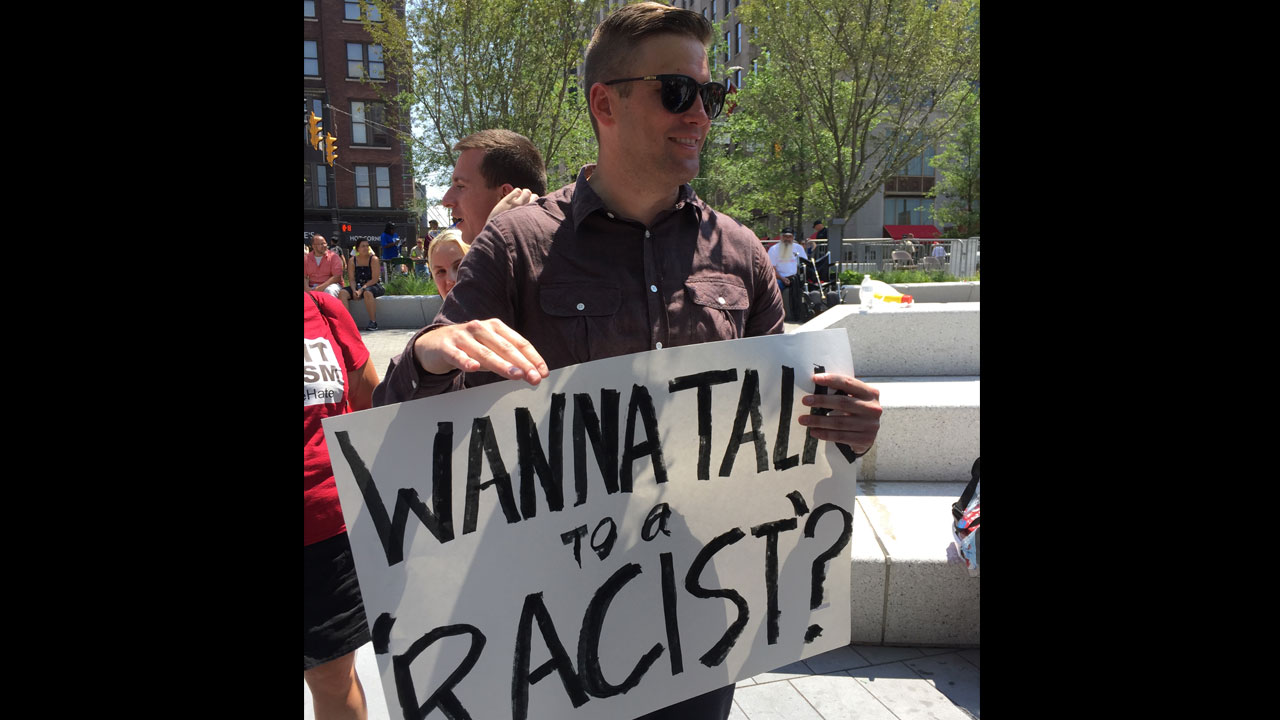 Imagine you’re the leader of a group that proposes to create a white ethno-state on the very ground a multi-ethnic nation exists today.  Imagine the fortitude, strength, and even violence that will be required to achieve such a vision. Heroic leadership, masculine toughness, and power to forcibly separate embedded cultures from each other are mere basic requirements.

The leader of this movement would need to be imbued with such fearlessness and aggression that others would quiver in fear and fall in line behind him.

And what the Alt-Right has instead is Pussy Dick Spencer.

The inauguration of Donald Trump must have felt like a victory for Pussy Dick and his team of LARP’ing wanna be tough guys. However, this weekend marked their death knell and the complete disintegration of their brand.

While the rest of us were celebrating at the kick-ass #Deploraball, the apocalypse befell Spencer, leaving his reputation as a leader of men now unsalvageable.

Pussy Dick Spencer is cooked as a brand and here are the three ways his pink pussy inner child revealed itself to the world on this momentous weekend:

1 Pussy Dick Spencer didn’t get invited to the big party so he crashed and scavenged any media he could get like a jealous schoolgirl.

The alt-right was disavowed and disinvited after their endless gaffes and self-sabotage, never mind their farcical visions.  From the self-induced Suicide Spectacle of a Nazi Salute to their continued anti-Jewish retardation, the alt-right wasn’t allowed to celebrate with the big boys at the historic #Deploraball.  So what does Jealous Richard do?  He crashes the after party, lurks around with reporters trying to feed his attention whoring needs, and gets big timed by a big guy after the big party (me).

Pussy Dick Spencer got smashed in the face revealing his weakness, inner softness, and fearful disposition.

Unprovoked violence is a bad thing, and I don’t support assaults on people.  However, since it happened, we can analyze what took place to learn from the incident.  What we learned is that this supposed tough-guy, a leader of men who intend to retake America and exclude all non-whites can’t even take a punch from what appears to be a frail old man.  Spencer sulked away fearfully after being struck rather than react with rage.

I’ve been clocked in the head a hundred times and I see red and fire back when that happens.  Poor Pussy Dick crumpled and slunk down the sidewalk alone.  No resilience, no response, no rage.  How is this guy supposed to lead a bunch of angry white men to retake their lands?  How could he lead a potentially violent revolution against armed citizens of the United States?  The dude could barely withstand a glancing blow from an old guy.

I made one of those Richard Spencer videos. pic.twitter.com/ToudvGAPhW

Pussy Dick Spencer is now a meme for life.  Set to music and replayed endlessly, Poor Richard is has been reduced to a sniveling baby.  This is your leader?  This is your tough guy? I don’t see that.

I see a pussy.

Cernovich saw folks supporting the political violence Spencer suffered and decided to make them put up or shut up. Mike graciously offered to sponsor a charity boxing event between Jason Calacanis and Pussy Dick as a way to raise money for a cause and end a public beef.  Jason accepted quickly.

Hi @jason. I would be pleased to sponsor a boxing match or MMA fight featuring you v @RichardBSpencer. Proceeds for charity of your choice. https://t.co/ZJc0Ymh9RB

I will destroy that Nazi scum in the octagon with pleasure. Bring me @RichardBSpencer & I will re-educate him wit delight. https://t.co/xWE5fHZwaA

I am impressed by his willingness to pony up and act like a man.  For this is a way men handle disputes: in a controlled display of combat which would settle it like gentlemen.

Instead, Pussy Dick failed to heed the call.

Cernovich offered him a chance to be a real man for once, and instead, Spencer is now claiming to channel his inner pacifist:

Are you kidding me?

For this commentator, Pussy Dick Spencer’s demise couldn’t have come any sooner.  And the way he went out is satisfying in way I couldn’t have scripted.

We know the alt-right has been a joke for a while, their vision of an ethno-state impossible or farcical, rendering Pussy Dick Spencer either a joke, a troll, or a fame whore.  What we didn’t realize was that he was actually all of the above plus a soft ass pansy too.

I put my challenge out to the alt-right and no one stepped up.

If anyone pulls any alt right heil Hitler shit at the deporaball I will literally be kicking their ass.

Later, I stepped up to Spencer personally and he had no answer.

Talking shit all year on Twitter, I jumped at the chance to confront Spencer face-to-face bc I’m not a pussy.https://t.co/XnKt1LYUbe pic.twitter.com/K8JxNMzAKP

And now the internet has meme’ed him into shameful irrelevancy once and for all.

Next post: Alt-Right to All Wrong: My Search for Answers