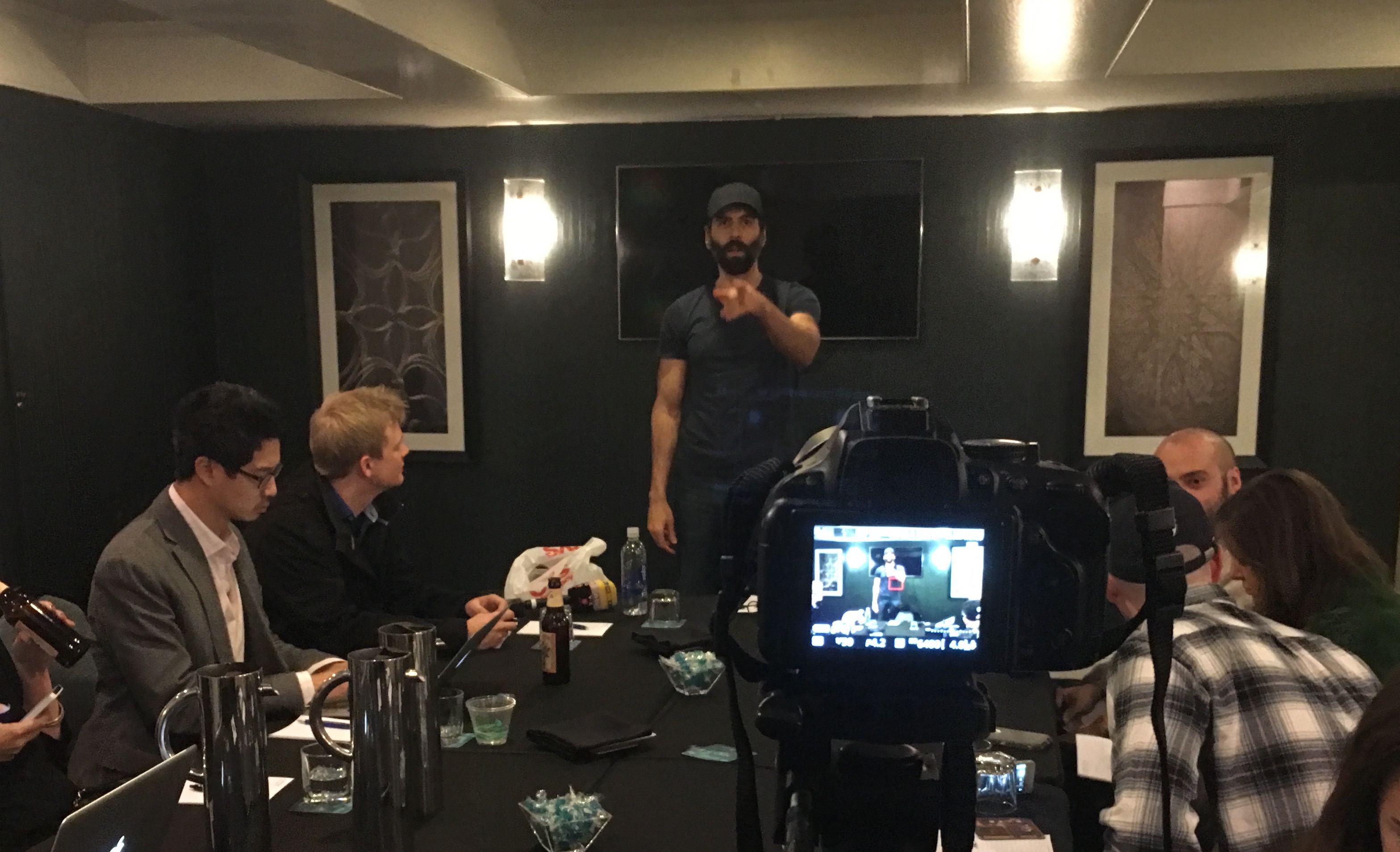 Meetups and Mobs: What the Media Missed at the Roosh Press Conference

WASHINGTON DC – I arrived early to get settled and examine the scene. Set in a conference room at a boutique hotel in Dupont Circle, the vibe was professional and calm. Totally banal and unexciting, just like the reporters that soon filled the room. I watched them filter in hoping to be surprised, but sadly I wasn’t.

What I saw would shock none of Roosh’s regular readers.  The men were scrawny and unimpressive, while the women were basic as basic could be.  Depressingly, it was just like most of Washington, DC.

Roosh began by asking who each of the reporters were and what publications they represented. Big names filled the air: Washington Post, Reason, VICE, the Daily Beast, and even convicted felon Martha Stewart was represented.  You could tell the reporters fronted with their bosses’ names, their false bravado provided by a tenuous relationship with corporate masters.

None of them wrote for their own brands. None of them used their own platforms. Without the stamp of approval by the establishment, these writers would be broadcasting their message into silence. Yet for now, they held the power to influence media outlets and readers world-wide with a few keystrokes.  When compared with Roosh, an independent media outlet with millions of viewers, the scene was set: corporate conformists vs. renegade self-made man.

I already knew what the media’s message would be before they even arrived: “‘Pro-Rape Activist’ Roosh V and his angry mob of rapists were about to set forth on a global rampage and must be stopped.”

Whether or not this was true was irrelevant. It was clear they were not there to gather facts or ask probing questions, but rather to confirm what they already believed: Roosh was a rape advocate.

Questioning that assumption would not only risk the narrative, but even the writer’s positions at the main stream publications.  Whether they realized it or not, their jobs were on the line – they had to keep up the assault. Returning to their editors with a human interest story on Roosh and his supporters would not only be met incredulously, but the global media would have rejected the story and the writer.  Maintaining the attack was the only option.

With their lack of security these fragile writers were hanging onto the narrative for dear life. They were unable to take risks and make critical inquiry into new and challenging subject matters.  Rather, they were determined to adhere to the party line to keep their jobs, many of which are barely glorified part-time blogger positions.

The reporters were finally face-to-face with the devil they had crafted in their writing. The pro-rape misogynist, leading hoards of angry rapists around the globe stood right there in front of them.  They finally had the chance to really dig in and learn what was driving all this. Surely, no man in today’s society would have the temerity to actually advocate for raping women?

This was their chance to get down to the truth.

All they needed to do was ask the right questions.

What societal circumstances lead to Roosh and his writing getting traction?  Why would men around the world gravitate towards a man the press was painting as a literal rape advocate?  What are those men thinking and why?  Are these men with power, or are they grappling with a sense of impotency? Unsurprisingly, not a single reporter asked a question like that during the entire press conference.

Had they been capable, the “writers” would have found themselves experiencing true journalism, unearthing previously hidden truths and revealing contemporary societal currents. Moreover, they would have learned Return of King readers and Roosh V supporters weren’t nearly the monsters they made us out to be.

Where among us were the basement dwelling social rejects promoting rape and abuse? There were none to be found, of course.  Had they taken the time to learn, they would have found what I’ve known all along.  Our ranks are filled with lawyers, professors, doctors, hedge fund operators, wall street professionals, teachers, professional athletes, famous authors and even government officials.

In fact, we are legion and we are everywhere.  We are your brothers and cousins and fathers and boyfriends. We reach out and build communities but are forced into anonymous online personas.  This latest round of media hit jobs only reiterates the need to remain faceless. Until it is clear we will be given a fair shake, most of us will retain our anonymity in the face of relentless lies, click-bait writing, and copy and pasting which passes for authentic journalism today.

Ugly green envy is partially to blame for the willing ignorance of the press. Even considering to investigate Roosh, his followers, and other prominent figures in this part of the internet world creates anticipatory dissonance.  In the mainstream writer’s minds, our brothers are uneducated rage-driven neanderthals…who also just happen to have created and developed their own media platforms capable of influencing the entire western media with a few blog posts. Giving any credence to Roosh’s ability to raise valid points of social or political commentary would also be acknowledging the false and fleeting authority they currently possess.

“How can Roosh V be a credible journalist, when we are the real ones?”

Who has the real power?

When today’s “writers” claim their status, they fail to mention they are basically well-appointed bloggers. Their audiences are hand-delivered to them via the brand recognition of their platforms. They are temporarily trading on previously earned brand authenticity.  If Caitlyn Dewey was fired from the Washington Post tomorrow, she’d be relegated to a status well below Roosh V. Her following on social media is a fraction of his and she appears to own no internet real estate of her own, lacking even a basic website to self-publish her work.

When these techno share croppers are moved off their land, they will find themselves silenced. They’ll have built no independent audience, leaving them mute in a world full of screaming voices. For them to investigate (and possibly validate) Roosh would mean facing their own deficiencies.

When the answer is, “you writers are slaves to your corporate masters and these men are free,” you can be sure the question, “just who are these guys?” will never be asked. They don’t want to know, and more importantly, they don’t want their readers to know either.  Finding the truth would be highlighting their own errors.  The writers were boxed in and clung to the narrative like the life raft is actually was.  They masked this fear in an arrogant sense of moral high-ground.

Yet, their bravado and arrogant superiority showed several cracks during the press conference. The writers repeatedly challenged Roosh’s masculinity by wondering why he wouldn’t walk head first into an angry mob, a mob ready to challenge not Roosh himself, but rather the media’s depiction of him.

As if deliberately withstanding abuse based on a false premise was a noble act.

It reminds me of the old female ploy, “let’s you and him fight!” The writers incited a mob and then attempted to shame their victim for not biting.  The irony of weak, slouching, liars challenging a man who has stood up to the entire world media seemed to be lost on the room of supposed experts of observation and analysis.

Who is trolling who here?

Ultimately, the media and Roosh were using similar tactics.  Each created false realities inviting the other side to crash the party, playing their prescribed part.  Roosh with his ironic think piece on rape legislation, and the Washington Post et al with their lie-fueled hate mob.

Unlike the media, Roosh refused to take the bait.  While the writers were losing their mind over a hypothetical discussion proposing changes to our legal system, simultaneously smearing him and spreading his message, Roosh was adroitly making alternative plans and moving the social gatherings to private locations.

If his goal was to create a global confrontation with the Return of Kings meetups, then his wishes were met beyond expectations. Angry lynch mobs were stationed around the world ready to pounce at first sight of the apparent devil among us. It would make for fine blog fodder and extend Roosh’s masterful manipulation of the outrage machine which mars modern media.

But that wasn’t the point, which was missed entirely by those writing on the subject.

The point, clear as day, was merely to foster a sense of community among men who feel isolated from the mainstream discourse.

This notion of socializing with like-minded folks purely for the sake of friendships was alien to these apparent social misfits.  Social justice warriors, techno-share-cropping bloggers, and ill-informed government officials revealed their own lack of social understanding via their articles, policies, and angry tweets.

It was beyond their comprehension that men would gather for nothing more than fellowship.  Like, you know, friends do.  Get together, have a beer, talk about your girlfriend or work, and then go home.

“Where have all the good men gone?”

I went out with 15 or so fellow Return of Kings and Roosh V readers that night. Our newly secret meeting had to be arranged offline to avoid the mobs waiting for us at the previously publicly announced meeting point.  Had the protestors actually seen us, they’d likely been surprised.

We were a multi-cultural group, but all carried similar traits: healthy, fit, confident, secure, and united. We were professionals, influencers, and guys who under normal circumstances who would certainly be identified as “catches.”

The answer to the question, “Where have all the good men gone?” was right there beside me that night.  We were out having beers with our fellow men, feeling more ostracized then ever before, yet emboldened twice as much. Antagonism from the mainstream press did not discourage us, it hardened our resolve. It proved our point and revealed our enemies.

But the final battles are far beyond the horizon, and this was just another skirmish on the way to total confrontation.  Despite their best efforts to shame and ruin us, the mass media only brought our message to a larger audience.  Lost in all the commotion was our central message to men: you are responsible for your own life, take charge and make the most of it.

The only group whose minds were influenced through this attack where Roosh’s current and now newly discovered readers. The old timers had their suspicions confirmed, and new fresh ears heard the message for the first time.  Plenty of people researched the media’s claims for themselves and found no monsters running amok. The Return of King’s comment sections are littered with folks who came for the outrage but stayed for the lessons.

And for that, mainstream media monkeys, we thank you.

Next post: You Deserve to Be a Sex God Part III: Jack Murphy’s Guide to Advanced Domination Techniques