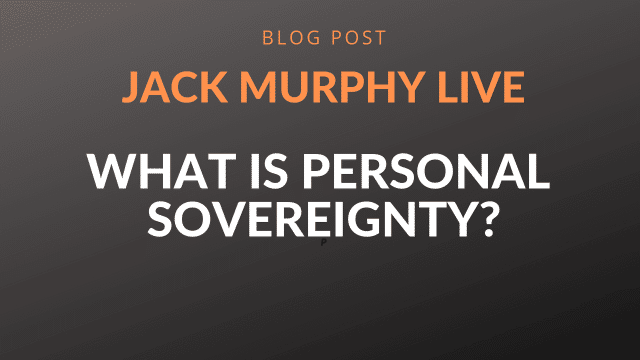 What is Personal Sovereignty?

What is personal sovereignty? It is the destination we seek.

When I started the Jack Murphy Live podcast, I knew I wanted to lead you on a journey. The idea was to help each of us create a new mental model of the world.

We need this because many of us are feeling lost. The system our parents and culture gave us isn’t working.

We’re adrift in a confusing sea with nothing to lead us and there is no comforting light illuminating the way.

Our ability to perceive and understand the world is diminished and because of that we feel confused, bewildered, depressed, and even angry.

It’s a justifiable anger. This isn’t just an intellectual exercise. There are bullets and arrows coming our way.

For us men, the very nature of our existence is under attack and we don’t understand why.

In fact, up until this year, if you even mentioned the idea that masculinity was under siege, people would have thought you’re crazy.

The verifiable mainstream attack on men is a key component of our disrupted world.

BEING A MAN IS A MENTAL ILLNESS

And they’re training an army of psychologists to treat men as sick people who need to be cured.

Yes, in a world where a man who wants to mutilate his body to become a woman is considered sane and normal – a male who is competitive and likes to take risks is now the sick one who needs treatment.

The APA isn’t some sideshow organization either. It has 118,000 members. It is the leading scientific and professional organization representing psychology in the United States.

The war on men can no longer be cast aside as some fabrication from the backwaters of the internet.

It is real, sanctioned, and ever-growing.

The progressives, the intersectionalists, and the feminists want to end your sovereignty as a man and convert you to a docile, controllable, neutered shell.

They want to end you.

We know this now.

There is no denying it any longer.

We must accept this to be true and move on towards a solution.

Thankfully, on my podcast journey I’ve come across some helpful information.

My latest guest, Jordan (Greenhall) Hall, blew my mind open and inserted a new way of seeing the world.

First, he describes where we are and how we got here.

He sees our world at a major inflection point, one as significant as when homo erectus became homo sapiens.

Jordan thinks we’re enduring a transformation that may come along only once every MILLION YEARS.

I mean, does it get any bigger than that?

If you’re feeling a little overwhelmed – IT IS OK.

We’re not really equipped to deal with anything bigger than a decade!

This is some epic historic shit going down and it makes sense to feel a little weird about it.

Together, he and I help explain the horrible feeling in your stomach, that sense that the world has gone mad and you don’t understand why.

The first step is to build a little scaffolding around us to prop up our sanity while we figure things out.

Once we have a context and framework to work with, we can then begin to organize our thoughts and feelings into something productive, rather than wallow in overwhelming stress and dissonance.

And we started the podcast the same way: by building a model of the world to better understand the chaos.

Naturally, after that, the next question is, well, what can we do?

Fortunately, what Jordan offered was not just a way to make sense of the world but a solution as well.

It is only with our personal sovereignty intact will we be able to move forward with courage and dignity.

Here are the six components to personal sovereignty:

Now, I’m not going to explain them to you here because I want you to listen to what Jordan has to say from beginning to end.

I want it to really hit home for you. This might be the most important podcast you listen to all year.

I didn’t bring Jordan Hall on by accident, folks.

Bringing him on was my way of introducing you to these new concepts and helping you to begin the process of mastering each of them.

I AM HERE TO HELP

I am helping you with personal sovereignty every day.

And Jordan has been helping us all for a few years now (even though he had no idea).

Jordan Hall was the one who coined the phrase “Blue Church.”

I explain this concept and how important it is in my book Democrat to Deplorable.

(yes the book is about WAY MORE than just Donald Trump!!)

Jordan is one of the great thinkers of our time and he took 90 minutes to speak directly to each of us.

I want you to listen to this podcast from start to finish.

Do you want to understand the world?

Do you want to feel better?

Do you want an answer?

Do you want a guide book?

Then check out my latest podcast with Jordan Hall.

I’m going to incorporate a lot his ideas into my future writing, so this is essential listening for readers of Jack Murphy Live.

And for my new men’s community (coming soon) – these ideas will be cornerstone content. It’s just that important.

And then listen to the whole damn thing.