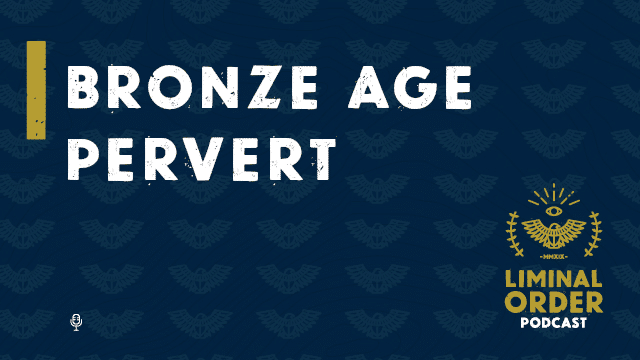 But people are starting to notice his words.

Bronze Age Pervert’s book, Bronze Age Mindset, first snatched the attention of youth culture and is now creeping into the mind of the political establishment.

Word is, Bronze Age Mindset has even been read by people in the Trump administration.

Broader media publications are starting to take notice. Claremont Institute and POLITICO recently ran pieces on the book, and the book’s momentum is becoming evident.

The book’s energy grows despite the fact that Bronze Age Pervert has done no media, no interviews, and made no appearances. No one has any clue who he is at all.

Which is why I’m proud to present to you an exclusive 90 minute interview with the one and only Bronze Age Pervert.

This interview wasn’t easy to get. BAP is a busy man with lots of shadowy enemies.

According to him, he is on the run from black magic and the dark forces of the underworld. They want to silence him because he has cast a light of truth penetrating the darkness which smothers our society.

He is an underground figure who is digging even deeper.

As he and I spoke it became clear he was in a foreign country, in some oddly noisy room, and was either using a fake accent to speak or he had a voice masking system. It was appropriate for a guy who claimed he was on the run and the target of voodoo magic. And to go along with the cloak and dagger feel, the audio is filled with weird sounds, strange crackles, and what sounded like a clothes washer running the entire time (heads up).

And at the same time, totally hilarious.

Next post: Bo Winegard, PhD Who is brave enough to tackle the big issues?